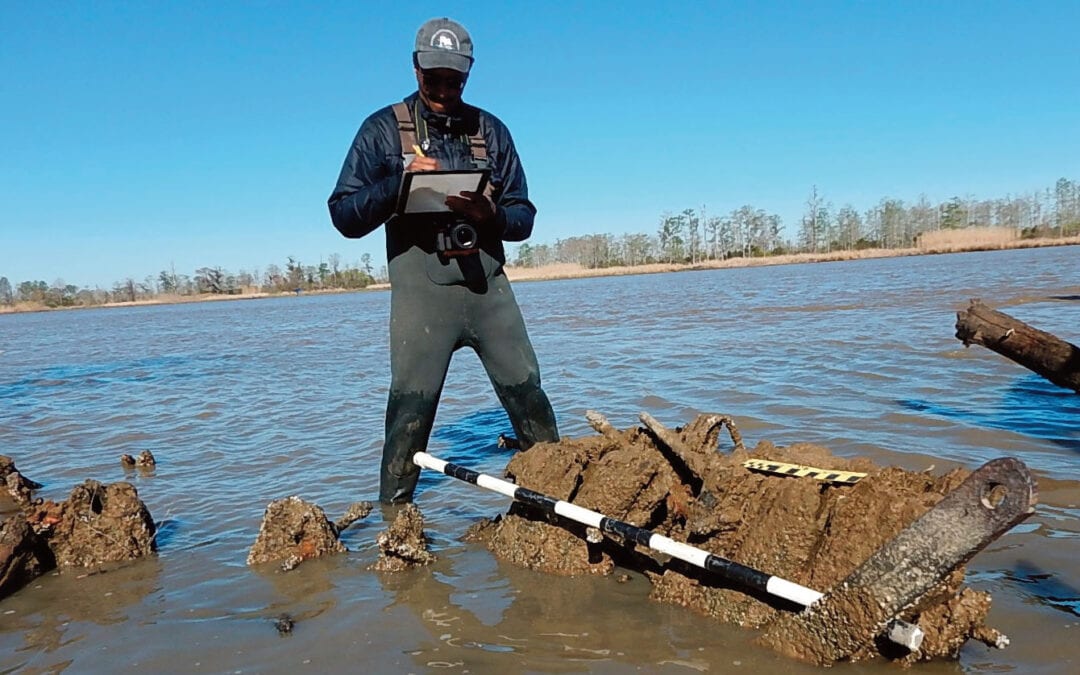 Clotilda wreck had been “disturbed,” but by whom?

Of all the things special about being a direct descendant of Africans who were aboard slave ship Clotilda, recently found lying under 20-feet of water in Mobile Bay, finding out what really happened to the 158-year-old relic might be the most exciting.

From the minute on May 24 when SEARCH, Inc., Vice-president James Delgado uttered the words, “Yes, it is Clotilda,” through the massive community celebration of its discovery two days later, a whirlwind of new information has surfaced about the sunken ship.

Some background:
Although slavery was still quite prevalent in the South, the practice of smuggling slaves from Africa had long been outlawed by the government. But in 1860, wealthy Mobile shipbuilder Timothy Meaher bet a friend that he could secretly sneak a boat-load of slaves to Alabama undetected by authorities.

He hired friend and veteran boat captain William Foster to sail the refitted schooner Clotilda to the west coast of Africa and return with a load of mostly slaves from the Yoruba tribe, captured and sold to him by the King of Dahomey, a rival tribe.

But upon his return to Mobile Bay, Foster got word the feds were onto the scheme, so he hastily off-loaded his cargo of 110 slaves, then set the ship ablaze and sunk it somewhere in the bay.

Fast forward to today:
SEARCH, the largest archaeology and cultural resources management company in the world, is just one of several partners that had been looking for the Clotilda ever since al.com journalist Ben Raines began his quest to find it earlier this year.

Upon its discovery, Delgado had samples of the ship’s wood and fasteners analyzed by experts, who concluded they were consistent with materials used to build it that were on record with the government.

But during his summary of the findings to a room full of descendants, Delgado dropped this bombshell: Since its sinking, there is evidence that the ship’s site (now under 24-hour surveillance) had been “disturbed.”

Now, Delgado made it very clear that his use of the word “disturbed” didn’t mean the ship had been hit by other present-day boat traffic, slammed by a school of fish or even been boarded by aliens.

He specifically mentioned that divers detected the use of “dynamite” as a tool of destruction, and intimated that the disturbance had taken place since the ship was sunk, although he couldn’t exactly say when the disturbance happened.

Now, it’s very possible – repeat, extremely likely – that any number of things could have happened to produce visible evidence of the remains being bothered.

But, it’s also within the realm of possibility that someone intended to finish the botched job Foster started more than 150 years ago when he struck a match to Clotilda in an effort to destroy evidence that the ship had been anywhere near Mobile Bay.

And, if true, it would have to be someone who knew the location of the sunken ship … a location very few people not named Foster or Meaher would know.

During Wednesday’s meeting with the descendants, veteran diver Kamau Sidiki of Diving With a Purpose, another of the partners who searched for Clotilda, near tears emotionally said “now is the time for justice.”

It was a not-so-veiled reference to the fact that someone should be held responsible if a crime is proven.

In 1861, Meaher and his co-conspirators were eventually charged with illegally smuggling slaves into the country, but charges were dismissed for “lack of evidence.”

National Geographic Society Archaeologist-In-Residence Fredrik Hiebert said Wednesday that the cargo hold of the ship will eventually be tested for DNA. And if that DNA matches that of even one descendant, evidence of a crime could very well exist.

If that indeed happens, where this story goes and what estates might be liable is anybody’s guess.

We use cookies to ensure that we give you the best experience on our website. If you continue to use this site we will assume that you are happy with it.AcceptPrivacy Policy